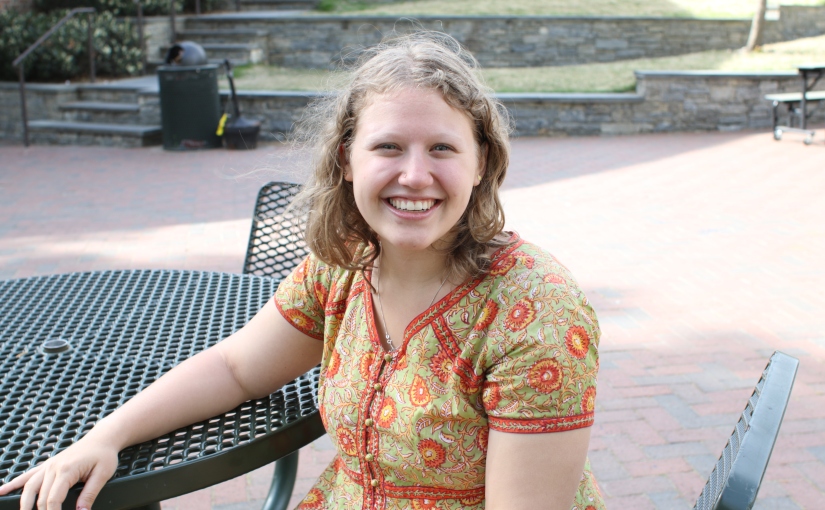 So you’re heavily involved with FYE and being an OA, how is it to be a guiding figure for the freshmen coming in?

I was an OA for three years– my first year I was a freshmen OA for Monroe, and the next two years I was a transfer OA. And I think the transfer OA job is almost more important, because people just forget that transfer students exist, but I think they are some of the most important people in our community. I was originally so nervous to be placed on the transfer and more staff, but it turned out to be absolutely fantastic. A couple of weeks ago the new Orientation Area Directors asked me to speak at the Spring Training for all the new OAs—it was a huge honor and very unexpected. I talked about how it was such an honor to be an OA, but also how important it is not to get caught up in the power of the neon shirt. People see the neon and they think, “Wow! You’re important.” I made a point that it’s not the shirt you wear that’s important; it’s about the work you do, the effort you put in to make the new students feel welcomed, and the time you spend having those honest and hard conversations on where our community can improve and what role they can play in that. I think that’s the most important part of being an OA. A lot of people see the hype, which is wonderful because we need to make the new students feel excited, but for me, it’s really about being consistently there for the students. We show up and show them that we’re here for you during the five days, but also that we’re here for you when those five days are over. It’s important to feel like you have an ally on campus, even when orientation is over.

Do you still keep in contact with the people in your orientation groups?

Yes! I see a lot of my students all of the time, a couple of them are in my classes! It’s really nice. Since they’re transfer students and therefore older, a lot of them are in upper classes and are juniors now. It’s awesome to see them on a daily basis—one of my students posted on Facebook the other day, she transferred in the Fall of 2016, that she joined the Women’s Chorus right away and said her only regret about being a transfer student is that she didn’t get to spend four years in the Women’s Chorus. I was like, YES, that is amazing and it makes me feel so happy that you have found your place on campus ! It’s all about finding your place and the people that you care about.

So do you have an memorable experiences or something that really sticks with you?

I have so many! You don’t realize that they put you in this role and all of the sudden you are a student leader. But it’s also about learning from other leaders as well. The co-OAs that I’ve worked with and the administration both. I realized that serving as an OA doesn’t mean just leading people, it means reflecting back on your own self and the person that you’ve become, and thinking about the ways you can grow as a leader and a human being at William & Mary. I think that’s the most important lesson that I took away. I can’t think of a single time that was my fondest memory. But I do remember one special moment during training—OAs have three days of training before the new students come where we spend 12 hours a day learning about campus resources and getting to know each other. This past summer, after the second day of training, I came home and thought, “I can’t believe that I get to spend 12 hours a day just thinking about creating a caring community. That is so special!” And the co-OA I worked with was just one of the most fantastic people that I’ve ever met. I didn’t realize how much that new friendship with my co had changed me and motivated me to be my best self.

I looked up to my OAs so much as who exactly I wanted to be, but you forget that all student leaders are human beings who are learning and growing as well. Seeing that growth happen within yourself is the coolest thing in the whole world.

During orientation, how were you able to maintain enthusiasm despite rough times?

There are a lot of moments where you’re like “Oh my god, it’s only 10 am!” However, there are a couple of ways that I get through it. First I’m a big joker—I will make light of anything with laughter, mostly by laughing at myself. It’s okay if you can’t laugh at yourself, but I’m going to laugh at myself and you can laugh at me, too. It brings people a lot of stress-relief when this person is laughing at herself when she messed up and tripped. I fell on my face by tripping on the bricks during Orientation and I thought it was so funny. Everyone was asking if I was okay, and I was like, “I’m totally fine, can we recognize how funny that was?” I have to laugh at myself as a reminder that I’m not perfect. Recognizing that you’re human is also big. Not every moment is going to be joyful, not every moment is going to be full of hype or you carrying a flag around campus feeling proud. Sometimes you’re going to be totally drained and totally overwhelmed. You realize that wow, this is also what these new students are feeling and how any person might feel when they enter a new community. They’re tired and overwhelmed with new information, and they’re trying to make friends and feel comfortable being themselves. It’s so much going on and using that as a point to relate to your students is very powerful. We’re all overwhelmed and we’re all tired, and that’s completely okay. As much as the hype is wonderful, the realism and the down-to-earth-ness of interacting with people individually is even more powerful.

So what brought you to become an OA?

My sister went to William & Mary, she’s four years older than me so she graduated and we just missed each other here. But she has always been the person whom I looked up to, and I used to think that I wanted to be exactly like her. She talked so fondly of when she was an OA and the relationships she formed with people. It’s a way to meet new people and learn about different perspectives on campus. On a totally selfish level, I absolutely wanted that, and on a more selfless level, I had a really hard time coming into college. I called my mom every night crying because I just felt like there’s an image projected of the William & Mary student who was happy, and I wasn’t happy. I hadn’t met my close friends yet and it took a lot guidance for me to realize that it’s not only normal, but it’s healthy not to feel happy all the time, especially at the beginning. It felt like every piece of information was being thrown at me and I couldn’t retain it as quickly as I had hoped. To also have to put on a facade of pure joy and happiness is not human at all. I also felt nervous that I wasn’t going to make people proud. I could’ve really used a dose of empowerment in that moment. Now I know that who I am is worthy of pride, especially who I already was—I already had everything that I needed, and the only person I needed to make proud was myself. Being able to recognize how people are feeling and being able to give them the dose of what I wish I had, that’s what really brought me to orientation again.

What was something that changed your perspective on the situation you were in?

One, realizing that the narratives about the experience aren’t true: there’s no one experience that anyone needs to have. At the beginning, I didn’t really find my place in my freshman hall, but the great thing about that is that it sent me out to campus to join student organizations. That’s where I made my friends and found my home. Realizing that everyone grows at a different pace and everyone adjusts at a different pace is important as well. I’m still learning to accept that for myself. Even with graduation approaching, everyone reacts differently and feels differently about it. In my head, when I came into college, I had an image of the way I was supposed to be and I spent the entirety of my four years here breaking that image down and realizing there is no one way that I’m supposed to be. The way I am is really good enough. Getting affirmation for being the person I was and for being weird and quirky all the time helped a lot, but that didn’t come until later for me. So it was a lot of personal growth, thinking about what self acceptance means on a really personal level.

Wow, I really relate to you when you said because you weren’t close with your freshman hall, you branched out to the campus and its organizations.

So which organization(s) did you find your place in?

I spent a lot of my time doing community engagement work as a member of APO, the co-ed service fraternity. I made all of my friends freshman year through APO because they were people who were also passionate about the same things. I also helped start a mentoring program with the Office of Community Engagement and I met people through that, through volunteering with Campus Kitchen, through AMP—I’ve done a lot of different things! I think it’s cool to do a variety of activities because then you’re exposed to a lot of different perspectives. For me, it wasn’t necessarily about being able to say I was a part of 16 organizations, but rather being able to say, “In a couple of fantastic organizations, I met all these amazing people who changed my perspective by being open to sharing their own.”

If there was something you could tell the future Women of William & Mary, what would it be?

The first thing that popped into my head was: you’re amazing! You are worthy and wonderful as you are. Don’t let anyone tell you otherwise, because you have so much to offer the world, and by existing you are offering that to the world. Everything that you are doing is good enough.