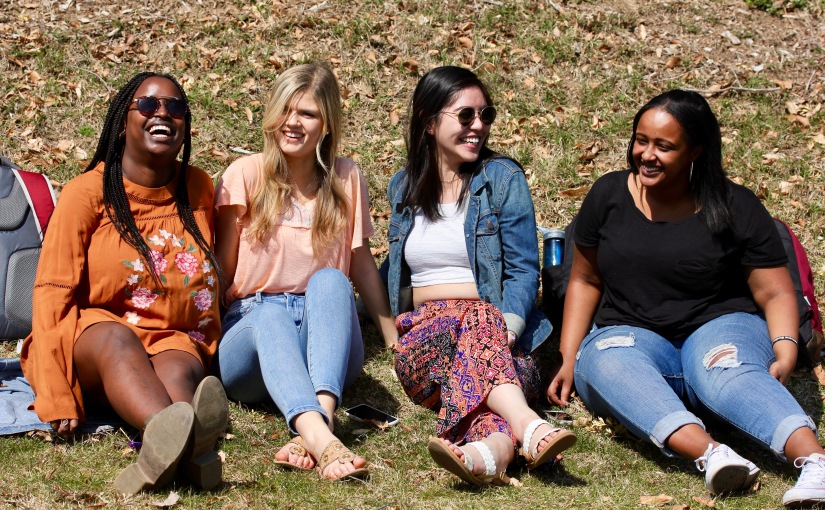 Tell me about the last time you felt really happy; what that felt like, what you were doing, where you were?

Raissa: The last time I was really happy was during spring break, when I went home and saw my family. My dad works out of the country, so we Skyped him, and my little brother is in college, and we were all Skyping, and it was really nice and really fun. Even though he’s not there, we are still able to be altogether, talking, and that was really nice.

Where does your dad work?

R: He works in Solomon Island, so it’s a little island near Australia and New Zealand. It’s a huge time difference so it’s really difficult sometimes.

So sometimes he’s in a different day.

R: It’s usually daytime for him, and then like 10 PM for us, it’s really weird.

Samantha: My grandbig Alexis told me to come over for dinner and she made me chicken pot pie, and it was so cute. She just had to put it in the oven – it was readymade. It was just so comforting, and I felt like I found a home here with her.

Menna: My happiest moment so far was getting to go home for Christmas back to Ethiopia and getting to hang out with my family, and going around the city, and going back to my high school. That was all happy.

Hope: I would say mine, recently, was when I went home for spring break, and I finally got to have good pizza again. I’m from New Jersey, and Sadler pizza just cannot compare, unfortunately. I get the effort that they’re putting in, but New Jersey pizza is just so much better. I got home and immediately, before I even stopped home, we stopped to get pizza.

When did you guys meet? How are you guys friends?

H: We’re (points to Mena) freshman hallmates, and then…

R: I met Sam at a party…and then I integrated myself into the friend group that they already had.

S: They all lived in the Units, but I lived in Botetourt. One of my freshman hallmates went to my high school for a while, and our mutual friends from high school would come over to visit us as well as her childhood best friend, who was Natasha…then Natasha introduced me to Hope, and then Hope introduced me to them…

So freshman year friends, and now you guys are juniors? What do you think kept you guys friends for so long?

S: I think we put in the effort and time to see each other. I was always in Hope and Natasha’s room last year, and this year too, and just having a central place to get together.

H: It’s a lot of linking friendships and relationships. I met Sam through Natasha, and Natasha was our freshman hallmate, and I knew Raissa via Mena, and me and Natasha have been roommates too, so everyone’s kind of central around each other. We just do a lot together, we take a lot of classes together too, we hang out on weekends too.

S: 75% of our classes this semester we have together! It’s crazy!

H: Because we’re all econ majors, except…

H: We still accept her!

What are some of your favorite things about each other?

R: My favorite thing about Hope is that she’s such a friendly and sweet person, she genuinely likes everyone. I’ve never heard her say a negative thing about anyone. She’s just so welcoming.

H: That’s like Raissa, she’s just a very positive ray of light. Always positive and always happy. And so is Sam. And then Menna, you can always joke around with Menna. Menna’s comments on everything are the funniest thing ever. In class, someone will say something stupid, and Mena will just say something under her breath, and it’s the funniest thing. I would be completely bored and then I just hear Mena’s comment and it makes it a lot better.

S: I think Menna’s really encouraging too. Especially last semester, I was in this accounting class called Strategic Cost Management. We had a lot of group projects and I was in a group of four, and three of them were guys, and I felt so intimidated because they would always take the lead on the projects and what not. We had to do this case competition and I was so frustrated with everything. It was hard and it was late, because you only had 12 hours to do it. And I was texting Menna, I was like “I wanna cry, I wanna leave,” and she was like, “You can do it, you’re in the same school as them, you’re just as competent.” And then I was thinking, “I’m gonna write her a Christmas card.”

M: You guys are interesting. I like hearing your stories.

S: And I think Hope is really easy-going too. She’ll go along with me to do whatever, like walk down to CW to get samples from Kilwins, without buying anything. And then Raissa just makes me smile.

What is your advice to being a good friend? What is the most important thing to find within a friend?

M: Yeah, and just checking up on each other. Like I feel like we don’t go more than two days without texting each other, to be honest.

Especially now, that’s important, because it’s so easy to get caught up in your own life, that sometimes you don’t realize you haven’t connected.

H: We talk about the little things to. Like, a day goes by, and if I haven’t heard what happened in their days, I feel like I’ve missed out on so much. If one of us is not here on the weekend, we have a lunch or dinner where we’re just like “Ok, tell me what happened!”

How do you guys feel about this weather? Describe that to me!

M: I’m getting my color back!

H: It just makes you feel happier. You can have five midterms but like, it’s beautiful, so it doesn’t matter.

S: I feel like time goes by slower when it’s like this outside. It’s just like I’m breathing, and I’m just appreciating it. When it was cold, I appreciate it – I have a really big window in my room, and when the sun comes in, it makes my carpet all warm, and I’ll just sit on my carpet for a while. My roommate questions it all the time. But I’m like, “Lemme just photosynthesize.” But now I can just do it outside.