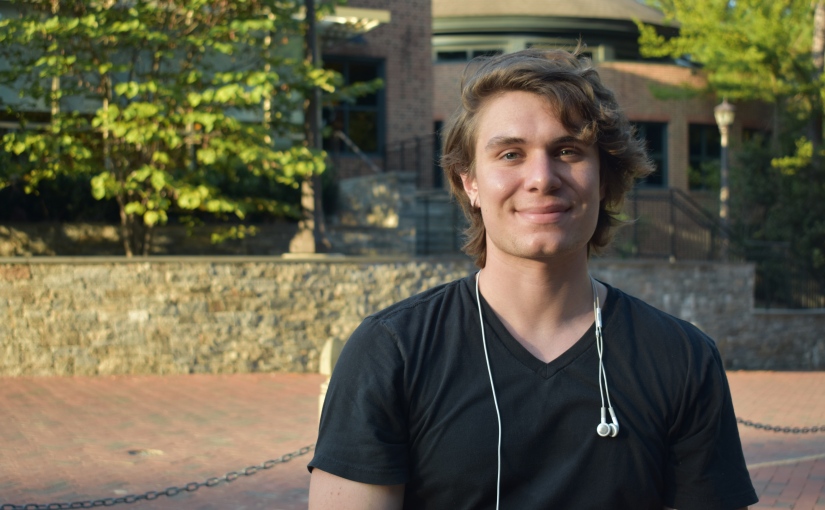 What do you think is something people might not know about you from first glance?

I think that upon first glance, I can look pretty intimidating. Lots of people have told me that, but when you get to know me, I’m chill, I’m basically a large teddy bear. There’s no reason for anyone to feel threatened. I like to try and be welcoming, but that’s just really who I am. I don’t really smile excessively, only when there’s reason to. Like I definitely do, just not that much. You gotta do what you gotta do.

I decided my theme for the year, because I am a senior, is that I am over caring about the “who’s cool” stuff. So I have decided to get aggressively weirder and weirder as the year goes on. Just really let myself be who I am regardless of social pressure. So I just bought an Irish tin whistle and I’m learning how to play it.

What inspired you to get into the Irish tin whistle?

Let’s see, why did I get one? I was kind of just online fooling around. I’ve been interested in Irish folk music these days.  Not for any reason, I just randomly got into it. Like I studied abroad, but I studied abroad in Scotland, so it’s not the same. My ancestors were largely Irish, and we have a family farm there but there’s a huge generational disconnect. So I’ve been listening to this music, and I played to a lot of music as a kid, and I thought, “Hey why not try the Irish tin whistle?” So I bought an Irish tin whistle.

What is something else that you find yourself embracing this year?

The tin whistle thing is pretty interesting. I decided to go vegetarian and/or vegan, doing Meatless Mondays and taking steps towards that. I think it’s good for the environment, but I’m pretty relaxed about that. I am doing modern dance, which is fun, because I think it’s something I would not normally be into. I am doing it for a requirement actually, but I probably would have taken it anyway because I don’t have a lot of academic classes I need to do. I would  graduate early but there’s a rule that you need to do the last certain amount of credits at William & Mary, but I’m in no rush So I am just hanging around and I want to get more involved, like with the whole Mechanical Mondays thing. I was a volunteer bike mechanic when I was studying abroad in Scotland.

There was this random Scottish dude who would come and help fix bikes. He’s like a fairly old guy, probably 60 something. Apparently he was a grade school teacher for 45 years, woke up one day and said, “I hate this job,” then quit it and became a bike mechanic. But his shop is in the back of a hair salon. So you have to walk your bike through the hair salon to get there. it’s hilarious, and it gives me a lot of perspective on certain things.

I don’t know if I told you this, but I am a computer scientist. I went to the eye doctor recently to get my glasses fixed. They dilated my eyes, and I went home. I wanted to write some code and I couldn’t see and thus couldn’t code, and I was like, “holy shit, if you can’t see you can’t write code.” I mean I’m sure there are ways, but my specialty is machine learning and artificial intelligence, so I am currently working on an artificially intelligent assistant that could write code for you. You’d be able to speak key words and write code by speaking it rather than typing it. That’s another thing I am doing this semester.

Was that inspired by not being able to see?

Yeah it was that one time I went to the eye doctor.

I also do random projects, like creating Tinder for trees. it’s exactly Tinder but you use pictures of trees instead of yourself. I figure I should probably do projects that actually help people, but that sounded like fun.