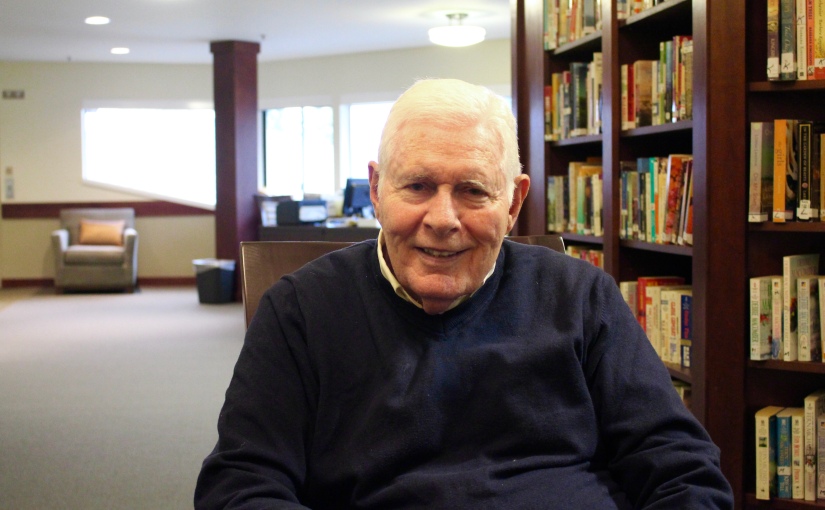 I work at a senior living community in Lake Oswego, Oregon, a few miles south of Portland. Art Davis is one of my favorite residents. Whenever I give him a drink or his food, he always says in his Mississippi accent, “Oh, bless your heart.” He spent some time in Williamsburg in the 50’s. I interviewed him while at home for spring break.

When did you live in Williamsburg?

I never lived in Williamsburg. I was in the Mississippi army, the National Guard. I was stationed at Fort Eustis, Virginia, which is about 6 or 7 or 8 miles out of Williamsburg. Fort Eustis was a small base. It was a transportation base, and it was located in a very pretty area surrounded by history. So if you were going to be in the army, it was a good place to be. That’s my relationship to Williamsburg.

And you visited Williamsburg a lot?

Did you ever walk through campus?

Anna, as well as I can remember, and correct me if I’m wrong, this goes back 60 years ago and my recall is not so good, but it seems like to me there was a drug store right smack-dab on the corner of the main street. And it seems like, and I could be wrong, that the street bat off to the left I think, and that was the extension of main street and you would go down a few blocks and William and Mary was on the right if I’m not mistaken. Is that right?

Well, I’m doing good so far. Now, I went down out of curiosity one day to look at the campus and to walk through the campus and to soak up the history and the ambiance of the campus and the beauty of it. And I thought to myself, “hey I would like to go to school here” but of course I did not have the opportunity. But years later, I was a college football coach and I thought to myself, “If William and Mary were to call me and wanted me to come up to interview for a job, I would have to go up.” I was so enamored with the beauty of the campus and the town and the history and the colonial aspect of it and all. It was so appealing to me. I didn’t go to the football office and I didn’t go to the football field. But to look at the building and the colonial flavor that the town offered and that William and Mary offered – it was wonderful. And for you to have the opportunity to go there to school is a great thing.

I would too. I would love going to school there, I really really would.

Did you ever go back?

I went back one time to a conference in Williamsburg. I want to say I stayed in the 1776 Inn. Is that still there?

At that time, it was a very nice place to stay. Williamsburg is one of my favorite places, and I’ve been to many places. The quaintness of it and the history and the colonial aspect – all of that is so appealing. I’ve only been back one time since the 50’s.

What years were you there originally?

I was only there for four months. Back then, when you were in the National Guard, you were required to go on active duty for six months, and I spent four months of that in Fort Eustis, which was a very good place to be. And more than once, maybe twice a week, we would get in a car and drive over to Williamsburg and do nothing but watch the tourists and eat a sandwich or something. We may have eaten on the base and then gone over to Williamsburg, I can’t remember. And then we enjoyed the fact that we could get off the base and have a glorious place to go. And it was. And am I right that Williamsburg is down the main street and on the right?

Well, I’ve got fairly good recall. And if I’m not mistaken, the main drugstore in the town was right there on the corner, and it’s probably not there anymore.

There is a drugstore there – it might not be the same one.

There is a drugstore there? Well I’ll bet you it is the same one. I’ll bet you it is. My memory is better than I thought. Anyway, it was a tourist place at the time and I’m sure it still is. We would watch all the people and visit with the people and sit on the bench or the curb and at 8:30 or 9:00, we would go back to the base. And that was our day. That was what we did. That’s about all I remember about Williamsburg, other than the fact that I liked it so much and if they had ever called me to go up there about a coaching job I would have gone because I liked it so much and it appealed to me. And it would appeal to any student school. If I were a student, it would be attractive for me to go there.

Where did you go to school?

Mississippi State. Are you a sophomore?

Ain’t that something? You’ve got another two years to go. That’ll be fun.

Well Anna, I can’t think of anything else as far as Williamsburg.

And Colonial Williamsburg was set up then, right?

Yes. And where we would get a hamburger or a hotdog or something, I don’t know. I can’t picture any fast food places in that area.

Do you remember Duke of Gloucester Street, DoG Street? Or Prince George Street?

I remember the names of them, yes.

Those are the main streets down.

Do the people still dress up?

And that’s part of the flavor of the tourist attraction and so forth. Well, you’re a lucky girl. You’re very fortunate to have the chance to go to that school.

And I saw William and Mary play James Madison this year, and I was wondering if you were at the game, and you said you weren’t at the game.

My dorm is right across the street from the stadium, so I can basically watch the game from my bed.

Really? But you don’t go to the games?

Not usually, sometimes I’ll go for a little bit.

[He tries to convince me to go to games and talks about football for a while. And then talks about his granddaughter at Baylor.]

Golly, Anna. My goodness. Well you’ve got a good start in life at a wonderful place and you’re meeting wonderful people.

[We talk about my sorority for a while. His daughter was a Kappa Delta at Mississippi State.]

Were you in a fraternity?

I was. I was a Sigma Chi. The blue of her eyes, and the gold of her hair, she’s a sweetheart of Sigma Chi. I wasn’t a real enthusiastic member. I didn’t have time to go to the fraternity. I was in football all the time and I didn’t have time. I did as much as I could. And now, they write me all the time for money. They want money for various projects and so forth, and I help them as much as I can. But I was never that gung ho about it. And you get out of it what you put in it, and I didn’t put much in it. But, I can say that I was a Sigma Chi and it was a good fraternity.