What’s happening in the story that you’re 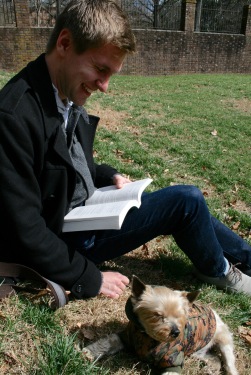 It’s hard to say exactly what’s happening because it’s narrated by a meth addict. I think he just went into a FedEx to try to pee.

That’s a tough question to ask an English major. My favorite book of the last year is called Of Human Bondage. It’s sort of a story about a guy who learns to live.

What is your biggest dream? Or the dream you most want to realize. It doesn’t have to be something big.

I think I’d just like to end up doing something that I care about and feel that the world is better for my having lived. I mean that in the vaguest sense possible, but…

No I totally understand. That’s what I want too.

How did you get involved with Humans of William and Mary?

Well I’ve been pretty obsessed with Humans of New York for awhile. I’m a freshman this year, and I started a version at my high school last year, so I wanted to continue with it. I like the idea of sharing people’s stories. I think it’s an important thing to do. And thank you so much, sorry that you’ve become a frequent flyer [for Humans of William and Mary]. What have you been interviewed about before?

Let’s see, the last time, it was about writing, and the first time was because I was doing a study abroad trip in India with somebody who was a part of Humans of William and Mary. The question was something like, “What’s been the hardest part of your trip so far?”

What do you think has been the hardest part of college?

For me, I think it’s been feeling that I belong here and finding a niche that’s number one, what I want, and number two, genuine.

There’s a lot to talk about community at William and Mary, but it’s still hard to find your place in that community.

I mean, a community doesn’t make it a whole lot easier just because it’s there. I know people who during orientation knew exactly what they wanted to do here, and I kind of waffled around a bit.

Do you think you’ve figured it out now?

I’m getting closer. I’ll have a nice little niche just in time to leave.

What kind of things do you look for in your niche?

The main thing is to have people that are a part of it. Regardless of what I’m doing, just to be with people that I could actually see being a part of my life well into the future, not just the next year and a half that I’m here.

Do you have certain aspects that you see in your friends that are common between them or does everyone bring something different?

How could you say that you find a friend?

Experiences, yeah, but maybe even just being in the same place at the same time.