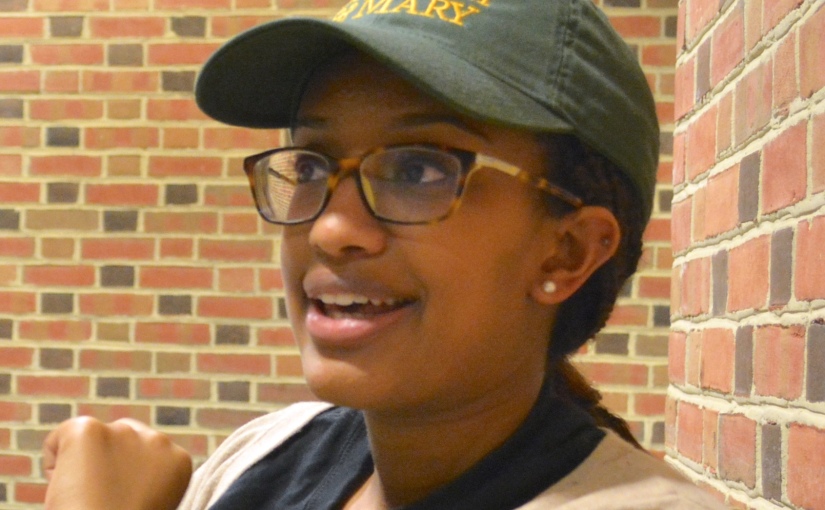 What are your first associations with the Charter?

I associate the Charter with history and tradition, and probably royalty, you know, “here ye, here ye, the king wrote this.” But then you think about what it entails and what it doesn’t entail and, more specifically, who it doesn’t entail, and you’re like, “Oh gosh, dang!” We almost did it. We did something great, but it could have been better. I love William & Mary, and because I love it so much, I have to criticize and question it in order to make it better.

What are the great parts of the Charter and what could’ve been better?

I think the main thing was founding a center for education. I think that’s a really great thing, and probably the only great thing. I think a lot of people would say that we were progressive for our time and that we were inclusive. And I think that’s a lie. In the grand scheme of life, a life is a life – no matter what kind of condition or parameter you put around it. So denying somebody something as basic as education is disheartening. It is going out and purposefully trying to make someone not succeed. Our society revolves around our economy, and you need to be self-sufficient in order to be successful. And in order to be successful, you need an education. So, if you’re denying somebody an education, you’re denying them their life. And that isn’t something that anybody should take away from someone – especially an institution, especially a college that stands for providing the best liberal arts education. So, to celebrate something that is celebrating the fact that we were denying people an education for such a long time is…ironic. I think that’s the best lighthearted word I could use, ironic. Maybe it’s because of the misconceptions surrounding the question “what is history?” that we tend not to realize that history is written from the perspective of a certain population – more specifically, white males who have money and whose families have influence. Once you realize the bias in our history books, and realize how limited our perspective of our past is, you will realize we’ve excluded all of the other histories from that time frame. In my opinion, it’s not a true history unless it’s a comprehensive body of stories from different peoples of that time.

This isn’t meant to be a hateful bash on the Charter or on the history of our college – because it’s quite phenomenal. Like, we did an impressive thing, you know, being here for 323 years. But I think we tend to idolize our founding fathers and even idolize historians to a certain extent. We fail to realize that not everybody is perfect. We need to start being okay with it not being okay and understanding that we, as human beings, can only strive to get better. It’s okay to admit that we’re wrong sometimes.

Having a day to celebrate the Charter is great, but I’m realizing that maybe it’s not the appropriate vocabulary. Maybe it’s triggering for some people to know that they’re walking in a land and a space that their ancestors built and weren’t given credit. But I’m not sure that the College is always able to acknowledge that, because we like to value a certain history and tradition.

I think initiatives like the Lemon Project are great. They try to highlight those things, but their initiatives are not heavily acknowledged by our College community. That might say something about the College and our students. Who really knows? But, maybe instead of celebrating this document, we should move towards just celebrating how long we have been here in general. I think most people would call that an anniversary or a birthday. When I turn 21, I hope would people say “Happy Birthday!” not “Happy founding of your life.” I think people underestimate how powerful language is and how much good, but also how much hurt, we can instill with our words. So I think Charter Day is great in terms of bringing the community together but maybe not great in the ideals that are behind it.

What qualities would you like to see instilled in future Charter Day celebrations? How would you want to make it better?

My intentions are not to devalue the Charter in any way. The Charter is a piece of our history and it will always be a part of our history. But I think we need to acknowledge the fact that it could be a triggering word and that it was also a document that excluded the majority of our population – well not a majority, that’s a lie – but a good amount of our student body and faculty and staff.

How did you start thinking critically about the Charter?

I would say I never really thought critically about the Charter itself, but more about the underlying history of William & Mary.

I still didn’t think racism existed during my freshman year. It’s like a defense mechanism where you choose to ignore certain things that happen to you because they will bring you down. Because if somebody constantly puts you down by criticizing your intelligence, where you come from, how you dress, or how you talk, it’s much easier to just zone it out and ignore it. I think coming here it became a bit more difficult because I experienced it more often. I’d be in classes with students or just at a party, and someone would say something offensive, either directly or in the form of a micro-aggression. So I think the environment and, you know, my background made me think about it. But also taking Africana Studies classes – it was like proof that I wasn’t crazy, in a way. It was like, “Oh this happens, this is a systematic thing that happens in this country.”

What was cool about it was that it wasn’t just like students of color in this class. There were a lot of white American kids sitting there learning. I think it was interesting to hear their point of view, and how they were like, “Wow, I just never knew,” or “Help me understand better.”

So those classes helped me a lot, in terms of putting into words how I was feeling. They made me realize that it was a real phenomenon that happens to people. So, essentially, realizing that racism can take the form of micro-aggressions, appropriations, any type of prejudice, is what made me think about William and Mary and our past. I wanted to better understand why and how some students think how they do, and what I could do to better our community.

Once I realized there was a problem the next question I asked was, “why does this problem exist?” That’s when I’d be like, “Ok, well, we’re a country that has been founded on the concept of slavery, the concept of belittling others, the concept of capitalism”.

There is this one article I like on history and how we idolize certain figures. It’s basically saying how a lot of times in history we look to pinpoint the enemy. It could be anything from the winners of our wars, to who is the more successful nation – literally everything. It asks why we do this and if this is what leads us to create these social constructs of race and what have you. So why don’t we shift the focus to the struggle, instead of who was the winner? What was going on and why did this conflict even happen? I feel like history does not put enough of a focus on this.

It’s as if we were asking the wrong question. We’re asking who when it should be why.

Right, and we always demand a resolution. We have to have an answer to everything. If it was true history, and truly portraying what happened, there wouldn’t be an answer to everything. Because, you know, it’s life. So why do we continually ignore the fallibility in history, and why don’t we question our history books more? Do the authors of our history books have an influence on how we portray history? I believe it does.

That’s so fascinating, because sometimes we’ve looked to history as if it were a novel with a clear conflict, resolution, and ending. But everyone is going to have a different perception of what actually happened.

Right, but the diversity of authors writing our history books is poor. Look in your textbook, and look up the authors. Is there someone of color? Is there someone of the LGBTQ community? Try to look for whose truths are missing when you’re reading, because if there is somebody that you can name as missing, then it is not a truly collective history.

And usually whoever is in power makes up the smaller portion of the population. So there could be a majority that isn’t in power, even though they’re higher in numbers – their story isn’t told.

Yeah, I mean that happens with a lot of things. I don’t know why. It’s just an interesting phenomenon. Maybe we just need more historians. William and Mary – keep making historians. Fund the Lemon Project. Fund diversity initiatives. Put it at the forefront.