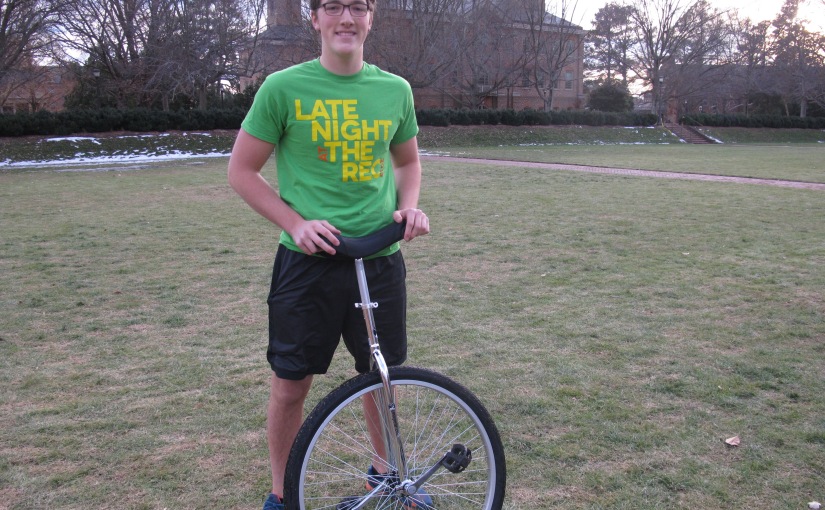 What are some of the reactions you get from riding your unicycle around campus?

“People approach me about it all the time, both in person and on social media. One of the funnier posts on Yik Yak said, ‘I’m sorry you didn’t get into clown college, you had to come to William & Mary instead.’ I put in the comments, ‘Yeah my juggling was off that day.’ Another person wrote, ‘I saw him roll into the rec. This is why I love William & Mary.’And there’s just a bunch of comments like, ‘Hey, it’s unicycle guy!'”

How do you usually respond?

“I usually put a comment back to them and say ‘Hey yeah, thank you so much for the shoutout!’ If there is a question or something, I’ll answer that.

“Yeah it’s fun. That’s why I picked up unicycling because I like to see people smile. When you’re riding a unicycle, it’s just so weird and out there, that people just smile at you and you wave back at them. Back when I rode in my neighborhood people would chase me. So that was kinda cool.”

“Lots of bumps. So it’s dangerous territory. But it’s a lot of fun. I usually keep to the sidewalks and swerve around people a bit.”

Girlfriend: “He basically picks up his unicycle and brings it into his classes.”

“Yeah, when I walk into classes on the first day of class, everyone always gives me a weird look because I walk in like this, *picks up unicycle*, and lean it against the wall. And they’re like, ‘Oh you’re unicycle guy!’ And I am like ‘Yeah!’”

“It’s better than unicycle boy. I heard there used to be a scooter boy or something like that. So since I got unicycle guy, I think that is a step up.”

Where did you learn to ride the unicycle?

“I learned on a basketball court actually, I would get up next to it, lean across the fence and be like ‘uggghh!’ *raises hands dramatically* and fall almost every time. I face-planted a ton. But after going back every night, within two weeks, I had it to the point where I could ride it around. Turns were hard, but I could ride it. So I started riding through my neighborhood, then after that it’s practice makes perfect.”

So you just picked it up yourself?

“Yeah it was funny actually. I worked two weeks over the summer doing straight doubles with my friend at my work. And he was like, ‘Well we just made a bunch of money, what do we want to spend it on?’ And he said… I don’t remember what he was thinking, but I said, ‘I’m going to buy a unicycle!’ which was equally as ridiculous as whatever he said. And it sat in my garage for a month and I was like, ‘Well haha, I probably should learn how to ride that.’ And so… youtube plus persistence equals unicycling.”

What’s the craziest thing that happened you on a unicycle?

“You know how when you take a right out of Swem and there is a staircase right there? So I was riding my unicycle past Swem, and literally like a second before I got to the stairwell, I was like, “ Oh shit, that’s a stairwell, I can’t go down that on a unicycle!’ So I veered to the left down this slopey hill and skidded sideways down it, jumped over a root, and ended up popping out on the other side. And I was like ‘How did I do that, how am I alive!?’ So yeah that was a little crazy. I’ve ridden it around inside Sadler a bit.”

“And then, let me think, what else have I done?”

Girlfriend: “Tell him your joke.”

Girlfriend: “He’s teaching me how to ride a smaller unicycle.”

Person from the crowd: “Is that a sexual metaphor?”

*everyone laughs*
Unicycle guy: I hope that’s not in the interview.